I’m not into sports. I have cheered my kids along in the sports they’ve participated in and I can be interested in the games which are of interest to my friends, family, and associates, but I will probably never be a fan or truly “get” what it means to be passionate about and have allegiance to a specific sports team, say, like the Seattle Seahawks, the new NFC champions who are heading to the Super Bowl on February 2, 2014 for only the second time in their franchise history.

Why do I know this collection of sports trivia? Because of all the voices around me, figuratively speaking, who are speaking up in passionate support and pride of this team. As a matter of fact, the “12th (wo)man” fans of the Seattle Seahawks have raised their voices and joined their enthusiasm together twice since 2011 to cause seismic events to register on the Richter scale.

There is power in lifting our voices together, especially when those voices are in agreement. Have you ever attended a concert, conference, or some other stadium event where the people in the audience were invited to sing the words to a song or anthem they had in common together?

When voices are raised in unison and harmony, it doesn’t matter if each individual voice is pitch perfect. The combined power of shared emotion, meaning, and experience unifies and transforms the disparate, individual voices into a singular, powerful, and magnificent voice that lifts and carries the hearts, minds, and imaginations of all who are participating.

The combination of unified action merged with unified voices can tear walls down according to the Old Testament tale of the Conquest of Jericho found in Joshua 6:1-5 – Holman Christian Standard Bible (HCSB)

An army marches around the fortified walls, steps falling in unison, sending powerful vibrations from their steps into the ground, day after day for seven days. On the seventh day, that same army marches seven times around while the sound vibrations from seven ram’s horns are continuously being played. Then, a prolonged blast of the horns and the combined voices of every member of the nomadic nation of Israel in a mighty shout causes the walls to crumble and fall.

So often that story is relegated to myth. However, after seeing how rowdy football fans can cause a minor earthquake, it seems less mythological and more plausible to me.

Today, in the USA, we celebrate Martin Luther King, Jr. A flawed and human man who had a dream to end the prejudice and stigma separating and oppressing people because of the differences in the color of their skin and their genetic origins. There is still a very long way to go in achieving that dream. Fifty-one years ago, he raised his voice to share his dream for us to not walk alone but to march ahead in unity to overcome oppression, prejudice, and injustice.

His speech was specific to the experiences of “The Negro.” However, I have little doubt that if he were alive today, he would be fighting against the stigma and prejudice that oppresses and marginalizes those who are neurodiverse and experience a spectrum of “disorders and illnesses” of the brain, as well. Especially, considering the increasing numbers of mentally ill overrepresented in the prisons, jails, and caseloads of probation officers. The National Institute for Corrections reports:

In a 2006 Special Report, the Bureau of Justice Statistics (BJS) estimated that 705,600 mentally ill adults were incarcerated in State prisons, 78,800 in Federal prisons and 479,900 in local jails. In addition, research suggests that “people with mental illnesses are overrepresented in probation and parole populations at estimated rates ranging from two to four time the general population” (Prins and Draper, 2009). Growing numbers of mentally ill offenders have strained correctional systems.

A report on Gender, Race, and Mental Illness in the Criminal Justice System by Melissa Thompson, published through the National Institute of Corrections in the Corrections & Mental Health indicates that there is an inequality and disparity in psychiatric evaluations and mental health services received by African-American men who are incarcerated or supervised in the criminal justice system.

Using federal and local statistics on the hospitalization and/ or incarceration of mentally ill persons, this article finds that psychiatric need is not the only factor criminal justice decision-makers take into account when seeking psychiatric explanations for criminal behavior. Instead, demographic, family, economic, and criminal factors are all important in predicting which defendants will be the recipients of psychiatric evaluations in the justice system. In this context, gender and race are important considerations. Violent women, for example, are more likely to be evaluated for psychiatric conditions, while African-American men are less likely to receive psychiatric evaluation.

I can’t stress the importance of using our voices to share our experiences enough. I don’t know what the true statistics are, but for generations people have been taught to suppress the “crazy,” ignore the “down,” to hide the “different,” and to be ashamed of being weak and wounded. We are increasingly criminalizing and marginalizing those who are experiencing cognitive, developmental, and psychological impairments and damage, criticizing them for not being able to pick up and put together their broken pieces. For every individual who speaks up and shares his or her story, hope, strength, courage, and truth is shared with others who do not yet have a voice. If we raise our voices of experience together, we can drown out the voices of stigma, ignorance, and hate. 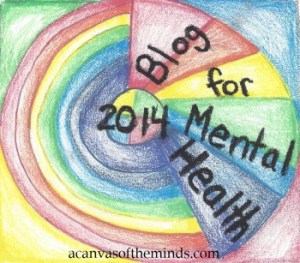 For more stories of Magnificence, join the Creative Buzz Hop #34, hosted by Michelle Liew from Muses from the Deep and Tamara Wood from PenPaperPad.