Happy is a feeling and feelings are fleeting. Happiness is a state of being and takes work.

The experience of Happiness is more challenging for some more than others and may seem impossible to achieve.

That’s because Happiness isn’t a goal or destination, but a byproduct, a side effect of the combination of our genetics, circumstances, beliefs, attitudes, and actions.

For many of us coming from lives filled with trauma and/or mental illness it will look different than it does for neurotypical people. We have to work through the trauma and confront ourselves to heal and grow. These are our prerequisites to Happiness.

There is no set formula for experiencing it. However, common and necessary elements include self-care (nutrition, activity, personal hygiene, etc.), engagement in healthy community, gratitude, service, and passionate purpose.

Pain, loss, grief, and other feelings and experiences, often considered “negative,” may suppress Happiness and cause us to lose it. But, what is lost can be found again. The negative doesn’t necessarily negate the ability to experience Happiness.

Of course, I could be way off and this is hypomania talking…but, I don’t think so.

For the first time in what feels like forever, I am happy. I don’t mean I feel happy, because at this exact moment, I don’t feel it, for numerous reasons. Despite not feeling it, I am happy.

I took a bit of a trip down memory lane this past weekend.

The left image was my freshman picture (I think), the upper right was either my 7th or 8th grade self, and the lower right was my sophomore picture.

I wasn’t happy in any of those pictures. I didn’t like myself and pretty much hated my life in each of them. At first glance, all that can be seen though is a beautiful, smiling face of a young girl without a care in the world. Then, if you look into her eyes . . . Well, they’re not quite telling the same story.

Middle school and high school years can be brutal. Especially if you don’t have the support and encouragement that comes with living in a family and community that offers and supports connection, encouragement, and cohesiveness.

That girl didn’t have any of those things. She thought she was fat, ugly, and unlovable. She felt isolated and alone, irreparably damaged, and inherently, inevitably like a failure.

I look at these images now and see beauty, potential, and nothing but possibility – or I would if I didn’t know that she was me.

I want to reach out to her and tell her it’s all lies, that she is none of the things she believes herself to be. I want to comfort her, encourage her, and teach her what she doesn’t know about herself: she’s beautiful, creative, graceful, loved, and valuable.

Looking back, I know some people did make the effort to do that. A teacher, a school counselor, a youth pastor. Sadly, their voices were drowned out in the cacophony of other voices she heard daily from her peers and those voices also were lost in the vast silence and overwhelming chaos that existed in her home life.

Bullied, abandoned, and essentially left to fend for herself, she became me and has dwelt inside of me all this time.

At 17 she became a mommy. Terrified, embattled, homeless, and nomadic she didn’t know anything really about loving her child. She did her best. Within two years she was doing it on her own. She never believed she was enough: knew enough, did enough, or had enough to do right by her son. There was never enough: time, opportunity, and support. She did her best, but her best wasn’t enough.

Defiant, conflicted, filled with shame and fear, she became me and has lived inside me all this time. 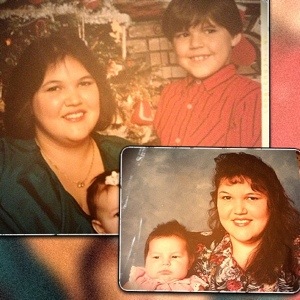 After years of trying to get it right: two GEDs and a High School Diploma, a fast and successful year in community college, and frantic pursuit of love, acceptance, and approval – she crashed and burned. Depressed, overwhelmed, and isolated she saw her mother in the mirror one day. A few weeks later, an aborted suicide attempt. Six months later a rabbit died and the proclamation was made by a family member, “Now you’re never going to get anywhere!”

At the age of 24, two became three and all the doubts, fears, and mistakes of her past lived and grew until she became me. 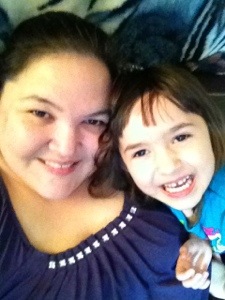 LaLa and I were talking about how this is the first time I liked a picture of myself and saw the beauty of me before I saw the flaws.

Then I saw this snapshot.

I was seven and a half months pregnant with her and 23 years old. Things were not alright in my life. Circumstances were still tough. I had a few friends and no money. What I did have though was hope. I had someone investing in me who believed in me, saw my potential, encouraged me, and supported me to go for what I wanted to do.

I was engaged in pursuing a goal and doing something I was good at. I hadn’t let the negatives outweigh the positives and dissuade me from pursuing the things I wanted to do. For that brief moment of time I had hope.

This is exactly the position I am in today. I have barriers, obstacles and challenges:
• Keith and I have been in major conflict for the past three days.
• The severity of the lower back pain & sciatica is becoming excruciating.
• Finances are in the toilet again.
• Technological and logistical glitches abound.

In other words, nothing new or different.

However, I am doing something I love that feeds my soul (blogging/writing/creating word art), I am reaching out and receiving encouragement, motivation and support (I joined the Dream Stoker Nation on Facebook), AND I’m moving – doing what it takes to get things done, despite the pain and difficulty.

The motion of moving forward, despite and through the troubles and obstacles drives the emotion that let’s us know we can be happy, even when we aren’t feeling it.

One of the greatest things about having a child long after you are done raising your other kids is that you get to rediscover the movies and stories that were good and wonderful when the others were younger, that you’ve forgotten about. Honestly, having a preschooler in the home is the best possible excuse to watch animated musicals and live action talking animals. Which brings me to Babe, a 1995 movie about a pig who gets saved from holiday slaughter and goes on to become a champion sheep pig.

This movie is absolutely full of wonderful messages about overcoming stereotypes and what kind of harm comes from being unwilling to acknowledge that another species has value and merit even though it doesn’t look the same as that of your species. Besides, talking barnyard animals, who can turn that down? That’s right, NOBODY!

One of the more anxiety-ridden and ridiculous animals is Ferdinand the duck. When the Farmer opted not to serve Babe up for the holiday feast, the duck was next in line. As the family is wondering and discussing the merits of Duck L’Orange for holiday dinner, Babe, the Cow, and Ma the sheepdog are looking on in the window in sorrow because they believe Ferdinand is no more and has been glazed to a beautiful brown sheen and is about to nourish the family.

Suddenly, Ferdinand pops up, surprising them all and it is revealed the unfortunate duck was a paramour of Ferdinand’s.

I wasn’t really paying a whole lot of attention. Let’s face it I was BLOGGING! I just had the show on so Luna would have something to divert her attention to between her independent play with her multitude of molded plastic horses and unicorns and her attempts to velcro herself to my lap. Suddenly I hear the following three lines and I was struck dumb and numb for a few moments.

Ferdinand: The fear’s too much for a duck. It – it eats away at the soul! There must be kinder dispositions in far-off gentler lands.

Ferdinand: ‘The way things are’ stinks! I’m not gonna be a goner, I’m gone! I wish all of you the best of luck.

The absolute profundity in those three lines are completely ridiculous to discover in a kid’s movie, but I’m so happy I was receptive enough to hear them and my mind porous enough to soak them in.

Living in fear is no way to live. It eats away at the soul and you will die if you continue to live in the land of fear. So find a new land to reside in.

Happiness isn’t something that comes from the outside and futilely striving to change everything and everyone to conform to your idea of happiness only makes everyone miserable. Happiness will only come once you accept that things are the way things are and stop expecting happiness when things change.

If you don’t like the way things are going for you, then you have to be the one to make the change.

Of course, none of this is new information. There are all kinds of memes and quotes floating around in cyberspace and virulent in social media, to the point these messages have become somewhat flippant and trite. Funny thing about truth? Flippancy and triteness doesn’t make it less true, people just tend to believe it and trust it less.

The fact that these truths are managing to delve their way into my consciousness and sink into my inner being is a very, very new and interesting thing. It proves that the inner dam walls that have kept me from enjoying, experiencing, and moving forward in my life are cracking and breaking down. The hold that depression and dysfunction have had on me and my life for so, very long are no longer the Goliath-sized demons in my psyche. The David-sized angel called Hope is slaying them down.

It’s been a long time coming.