A few weeks ago I was too sick to make it to the gathering of my faith community and I missed out on the teaching that day. It was on anger. I was quite glad to find out that it was on that topic and that Keith had been present for it, since he has been the incarnation of anger in our lives. I get frustrated and angry about justifiable things and generally make the effort to be measured, controlled, and self-contained when I experience and express the feeling of anger.

I did later go to the Bridge City Media You Tube channel and view what I had missed. It was pretty powerful and I did experience a recognition that I had some work to do around anger. The message was, “Be Angry and Do Not Sin, Ephesians #21.”

The two things which have stayed with me since viewing this are:

I thought the message was fantastic, but I still wasn’t really connecting to it on a personal level. After all, I’ve worked hard to become a pretty self-aware individual and I rarely show anger, except for, you know, when I’m trying to get out the door to catch the bus to get Luna to school before the 9 a.m. cut off and she’s dilly dallying because she can’t decide which forbidden toy to bring with her to school to nap with. But that’s just frustration, not anger, so, despite the short, snappy, snarling and increasingly strident voice to convey exactly how frustrated I really am, I don’t have an anger management problem, right?

Then, Sreejit from The Seeker’s Dungeon, tagged me in this week’s DUNGEON PROMPT – SEASON 2, WEEK 4: ANGER MANAGEMENT .

I thought about it and figured I would write something about the sermon on anger and spiritual process. Still, I felt quite disconnected from the topic.

Then, later on that same morning, I was in a meeting with the county mental health worker who works out of Luna’s Head Start program. I hadn’t really had a chance to speak with her, since the events back in December, which precipitated the transition in my relationship with Keith, by not living with him, while I really focus on my mental, emotional, spiritual, and physical health issues.

I’ve shared with her, over the course of several meetings, about the molestation by my stepfather as a young girl, my mother’s death, my uncle’s drug use and abdication of responsiblity, the fact I wound up caring for my baby cousin and taking on adult responsiblities as a young teen, the three and a half years spent living out of cars and hitchhiking across the country under the manipulation and control of my son’s father (who was 14 years older than me) verbally/emotionally manipulating and conning others for our survival, becoming a mom at 17 in the middle of that mess, being almost killed by my husband in front of our son and my best friend from high school, who I’d caught in a compromising position with him, and how they left together after he didn’t kill me. She also knows some of the particulars of the living situation and relationship dynamics which contributed to and precipitated the blow up that was the straw on this cambel’s back.

She brought up an interesting question. She pointed out that the things I have lived through and experienced would tend to make most people feel more than a little angry. She asked me what had happened to my anger.

What? Me angry? I was supposed to be angry about these things? Why? What’s the point?

Then I realized, I did have anger. I was beyond angry at the verbal altercation which happened between Keith, LaLa, and her SpiritLove and the fact that while each one of these people adores Luna and wants the best for her, in that space and time, in that moment, none of them was capable of making the choice to shut their mouths and walk away. Instead, they kept on and on at each other, getting louder, physically encroaching on one another, increasing the agitation levels, to the point that Luna, opted to hide under a blanket, cowering in confusion and terror because three of her beloved big people were being so scary, with big, loud voices, intense anger, and physical posturing of aggression. It really pissed me off to realize that none of them could make the choice to shut up, turn around, walk away, and keep walking to deescalate the situation, despite the realization that what they were doing was terrorizing Luna. I heard them shaming, blaming, and accusing one another of hurting Luna and ruining her birthday.

Yeah, I was angry.

When the counselor brought the subject of anger up, I thought about the missed sermon and the prompt. I realized God just might be trying to get my attention. Then my friend – (author) Tamara Woods, shared the Creative Buzz Hop word of the week, Revenge.

I had watched the first couple of seasons of the show, Revenge. The story of a young woman who had moved back into the community, as an adult with a different identity, which had essentially destroyed her life as young girl by scapegoating her father, resulting in his imprisonment and death. She wound up a ward of the court going through the foster system and the juvenile justice systems. Now, she wants revenge and is accomplishing it, marking off one enemy at a time.

While her story may be television fiction, there are a lot of truths to it. This young woman was deeply wounded as a child. Initially, it destroyed her belief in her father and shattered any sense of stability and goodness she had about the the world. She later learned the truth about what had happened. Instead of the truth setting her free, it trapped her in anger and loss. Exacting revenge and bringing harm to those who had hurt her and her father became her sole focuse and function. Everything about her life and the choices she made were in service to the anger, which fueled her need to make them pay and destroy them, make them suffer, the way her father and she had suffered. In her crusade for revenge she became more deceptive, manipulative, and toxic than some of those she sought revenge on. The fallout from her vengeful mission harmed innocents whom she loved and cared about.

There are things worth me being angry about and there are things which might seem perfectly reasonable and understandable for me to want to seek revenge for. However, I have other priorities for my mental, emotional, spiritual, and physical energies: Raising Luna in better and more responsible way and doing things differently for her so she can have a different outcome than what her siblings and I have experienced is the biggest priority. Next is focusing on my healing process so that all my pain and suffering can be harnessed for constructive and life-affirming purposes in the lives of others, including, hopefully, my adult children’s lives.

If I’m to achieve that, then I have to be honest with myself and with a therapist about the reality that yes, indeed, what I have experienced and name it for what it was and is: Abuse, neglect, emotional and physical violence, a turning and twisting of the psyche and the character of the woman I was intended to have been. Instead of seeking revenge and trying to cause pain and suffering in exchange for the pain and suffering caused to me, I’m choosing a different path. 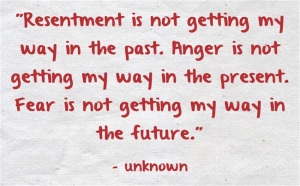 I can’t change the past and the ones who made the choices and decisions which caused such harm and damage, were harmed and damaged people themselves. Hurt people, hurt people. Their process and journey are not my responsibility and not in my control.

19 Friends, do not avenge yourselves; instead, leave room for His[a] wrath. For it is written: Vengeance belongs to Me; I will repay,[b] says the Lord.

I have other, more constructive things I want to accomplish. Full reconciliation between myself and my adult children; increased mental, physical, and spiritual well-being for myself, so that I can be the mother Luna needs me to be.