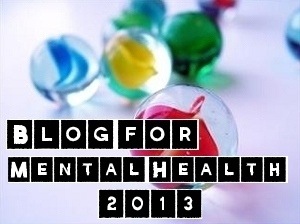 For those who have been following this blog for a while, you are familiar with some of the relational difficulties Keith and I have had and you may have seen previous postings where I’ve stated I believe we all experience difficulty with an undiagnosed mental health issue of his that I’ve identified as probably being Borderline Personality Disorder (BPD).

I’m bringing this subject up again, because of two reasons: One, understanding that behavior which is typically identified as stalking and domestic violence may not necessarily be something that is consciously chosen by the individual and is frequently dismissed and doesn’t stem from a need to dominate, control, and hold power over others. Two, people exhibiting these signs and symptoms need compassion, empathy, and understanding as much as their “victims.”

Individuals with BPD usually have several of the following symptoms, many of which are detailed in the DSM-IV-TR:

• Marked mood swings with periods of intense depressed mood, irritability and/or anxiety lasting a few hours to a few days (but not in the context of a full-blown episode of major depressive disorder or bipolar disorder).

• Recurring suicidal threats or non-suicidal self-injurious behavior, such as cutting or burning one’s self.

• Chronic boredom or feelings of emptiness.

Borderline personality disorder is relatively common—about 1 in 20 or 25 individuals will live with this condition. Historically, BPD has been thought to be significantly more common in females, however recent research suggests that males may be almost as frequently affected by BPD. Borderline personality disorder is diagnosed in people from each race, ethnicity and economic status.

In the past, I have characterized my relationship with Keith as toxically codependent. It was. It has improved quite a bit in the past eight or nine months as I have done a few things:

1) I made the conscious decision to start finding out how to communicate in ways that a person with BPD can receive and process information. Then began acting on that information.

2) Work on acceptance and forgiveness while also working on letting go of criticism and judgment. However difficult and personally painful it is dealing with him when he acts out on his impulses, intense & irrational anger, and unstable moods, I now know and understand that he is no more the cause of what I believe to be his illness/issues than I am the cause of my depression, hypomania, and attachment disorder. No one consciously chooses to be this miserable and unstable.

3) Seek support from my peers. Since the average, “healthy” person has no context to understand my decision to stay in relationship with him and I have been subjected to harsh judgments and criticisms regarding that choice, however justified the people passing judgment and offering criticism may be, I have stopped trying to get others to understand or condone my decision. Instead, I now participate in a closed, private, online support group with other people who are or have been in relationship with someone who experiences and exhibits symptomology consistent with BPD. It is a safe place to vent, receive, and give supportive encouragement.

4) Focus more on myself and my own growth and healing. As I have looked at my own attitudes, history and patterns I am learning how I have played into our relational difficulties and am learning to choose different ways of responding to his behaviors and words instead of staying other focused on what I want him to change and do different. Doing that has not eradicated the “problems” but it has gone a long way toward improving our relationship

5) I am making conscious efforts to get out of my situational and self-imposed isolation and have committed to doing things I need to do to take care of myself and seek after ways of achieving my dreams and goals, instead of simmering in bitterness and resentment that he is limited in his ability and capacity to encourage and support me in those things.

I know that by choosing to stay in relationship with him, I am choosing a more difficult path. However, the things that I value and believe inform and dictate this choice. He is committed to me and our family. He is working to provide for and support our family. He WANTS to be a father to our daughter and is doing the best he can to be the dad and husband he wants to be.

A member of my support group shared an image from the Facebook Page, The BPD Monster and Me. I want to share it with you. 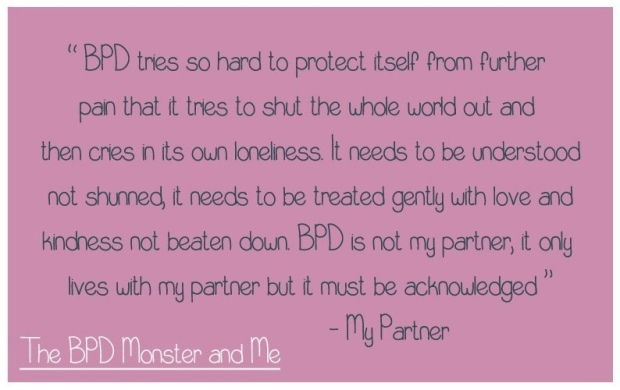 One of the things I have learned and come to understand as part of the healing and recovery process is that the people and relationships I wind up engaging with and having in my life are a reflection of my inner being. What this means is that however dysfunctional and damaged I believe them to be generally indicates that I have the same level of dysfuntionality and damage. The less I focus on their dysfunction and damage and the more I take my cues from their issues and am willing to see and address my own, the healthier I become. As a result, I am encountering new people and building new relationships where I am finding new and different reflections of myself.